Hong Kong has banned non-residents from entering the city from four African countries and plans to expand that to travellers who have been to Australia, Canada, Israel and six European countries in the past 21 days due to fears over Omicron.

The food and health secretary, Prof Sophia Chan, made the announcement at a press briefing.

Hong Kong’s very stringent system of boarding, quarantine and also testing requirements has successfully stopped the transmission of the three Omicron situations, that we have identified in our designated quarantine hotel, from going into the community.

To prevent the Omicron variant from entering the community, the health chief said, Hong Kong should implement the most stringent measures.

In addition to the eight southern African locations announced earlier, the government would also include all other overseas places that had detected Omicron situations in the list of group-A stated, or high-risk, places.

The Hong Kong government said in a statement late on Monday that non-residents from Angola, Ethiopia, Nigeria and Zambia would not be allowed to go into the global financial center as of 30 November.

Residents could return if they were vaccinated but would have to quarantine for seven days in a government facility and another two weeks in a hotel at their own cost.

Non-Hong Kong residents from these four places will not be allowed to go into Hong Kong.

The most stringent quarantine requirements will also be implemented on applicable inbound travellers from these places.

Additionally, non-residents who have been to Australia, Austria, Belgium, Canada, the Czech Republic, Denmark, Germany, Israel and Italy in the past 21 days would not be allowed to go into the city from 2 December.

Vaccinated residents returning from these countries would have to do three weeks of hotel quarantine. 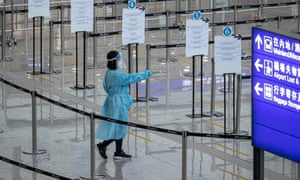